Breaking the path of curve objects

Paths outline an object’s shape and are often visible as one or more line or curve segments. You can disconnect line segments from one another to create subpaths. Even though they are not connected, subpaths are still part of the defining path of the original object; however, you can extract a subpath to create two separate objects: the extracted subpath and the object it was extracted from.

Subpaths are the basic curves and shapes from which a single curve object is constructed. For example, a single curve object with subpaths is often created when text is converted to curves. The letter “O,” for instance, is composed of two ellipses: the outside ellipse that defines the letter’s shape and the inside ellipse that defines the “hole.” The ellipses are subpaths that compose the single curve object, “O.” One of the basic reasons for creating an object with subpaths is that you can produce objects with holes in them. In the following example, you can see objects underneath the center of the letter “O.” 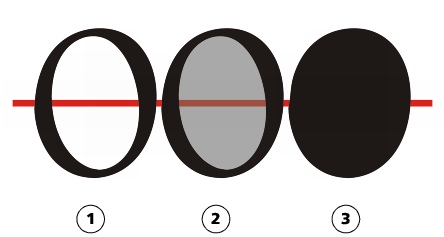 Breaking the path of curve objects