The Image Adjustment Lab lets you correct the color and tone of most photos quickly and easily. 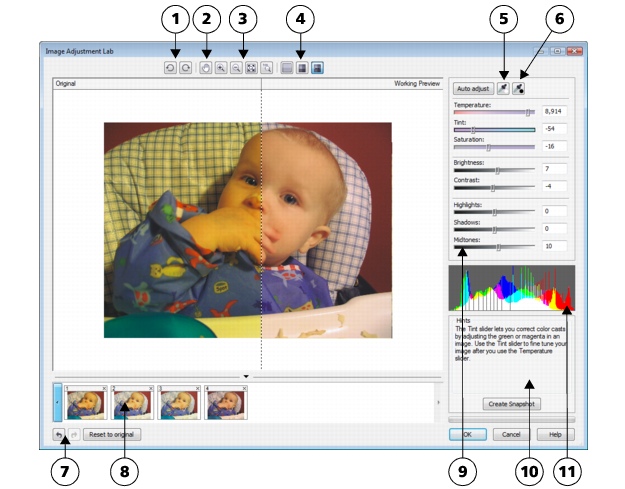 The Image Adjustment Lab consists of automatic and manual controls, which are organized in a logical order for image correction. By starting in the upper-right corner and working your way down, you can select only the controls you need to correct the problems specific to your image. It is best to crop or retouch any areas of the image before beginning the color and tone corrections.

When you work in the Image Adjustment Lab, you can take advantage of the following features:

You can begin by using the automatic correction controls:

After using the automatic controls, you can correct color casts in your image. Color casts are typically caused by the lighting conditions when a photo is taken, and they can be influenced by the processor in your digital camera or scanner.


Adjusting brightness and contrast across an entire image

You can brighten, darken, or improve the contrast in an entire image by using the following controls:

Adjusting the brightness and contrast of an image can reveal more image detail.

The Highlights and Shadows sliders can lighten or darken specific areas of an image.

The histogram lets you view the tonal range of an image to evaluate and adjust the color and tone. For example, a histogram can help you detect hidden detail in a photo that is too dark because of underexposure (a photo taken with insufficient light).

The photo on the left is underexposed. Right: The histogram indicates a large amount of image detail in the dark areas of the photo.

The tools in the Image Adjustment Lab let you view images in various ways, so that you can evaluate the color and tone adjustments you make. For example, you can rotate images, pan to a new area, zoom in or out, and choose how to display the corrected image in the preview window.